Based on the "Data Science" category.
Alternatively, view pairAdjacentViolators alternatives based on common mentions on social networks and blogs.

* Code Quality Rankings and insights are calculated and provided by Lumnify.
They vary from L1 to L5 with "L5" being the highest.

Do you think we are missing an alternative of pairAdjacentViolators or a related project?

An implementation of the Pair Adjacent Violators algorithm for isotonic regression. Written in Kotlin but usable from Java or any other JVM language.

Note this algorithm is also known as "Pool Adjacent Violators".

What is "Isotonic Regression" and why should I care?

Examples of such isotonic or monotonic relationships include:

These are all examples of an isotonic relationship between two variables, where the relationship is likely to be more complex than linear.

So we know the relationship between x and y is isotonic, and let's also say that we've been able to collect data about actual x and y values that occur in practice.

What we'd really like to be able to do is estimate, for any given x, what y will be, or alternatively for any given y, what x would be required.

But of course real-world data is noisy, and is unlikely to be strictly isotonic, so we want something that allows us to feed in this raw noisy data, figure out the actual relationship between x and y, and then use this to allow us to predict y given x, or to predict what value of x will give us a particular value of y. This is the purpose of the pair-adjacent-violators algorithm.

Using the examples I provide above:

If you have an hour to spare, and are interested in learning more about how online advertising works - you should check out this lecture that I gave in 2015 where I explain how we were able to use pair adjacent violators to solve some fun problems.

A picture is worth a thousand words

Here is the relationship that PAV extracts from some very noisy input data where there is an increasing relationship between x and y: 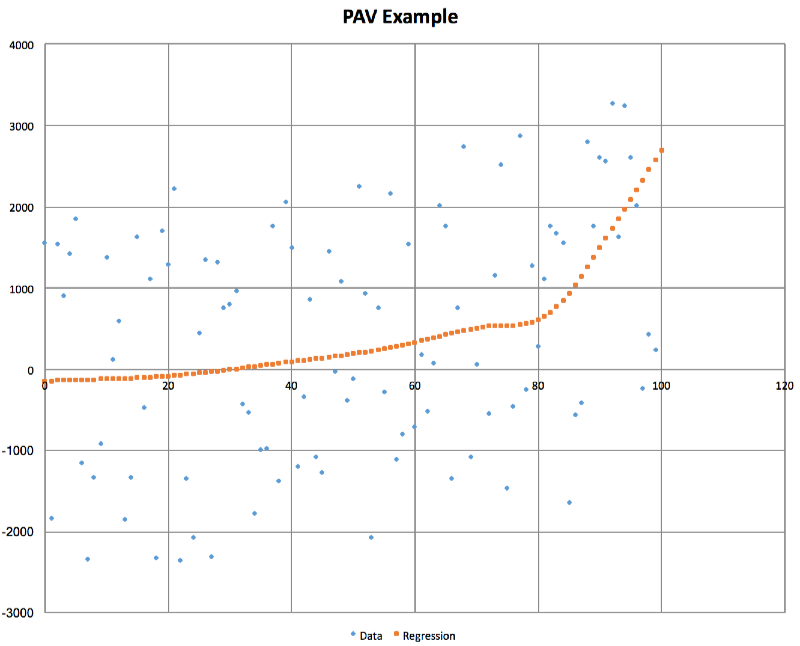 You can use this library by adding a dependency for Gradle, Maven, SBT, Leiningen or another Maven-compatible dependency management system thanks to Jitpack:

Released under the LGPL version 3 by Ian Clarke.


*Note that all licence references and agreements mentioned in the pairAdjacentViolators README section above are relevant to that project's source code only.

Do not miss the trending, libraries, news and articles with our weekly report.